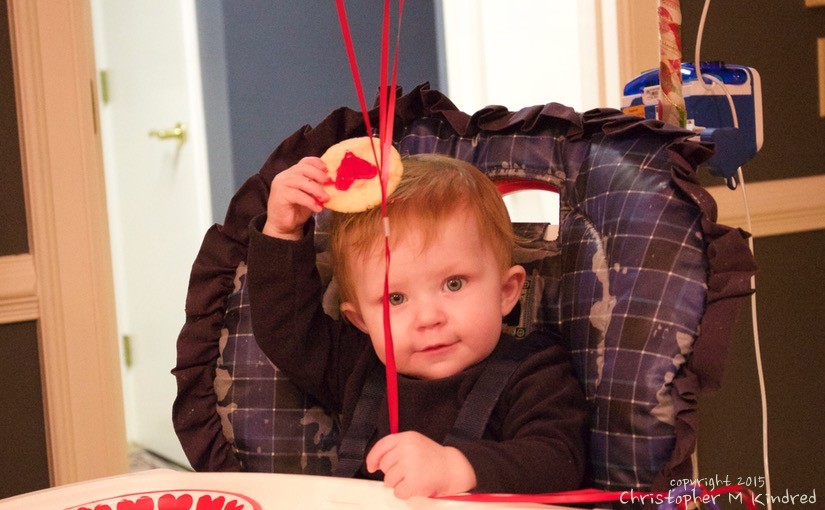 Isabel was 1 week post op from her first open heart surgery at this time last year. It is crazy to think about how much has gone on in a year. We are very blessed that she is as healthy as she is right now. The picture is from her Heart-aversary party!

It was a busy week for us. Isabel had her first cardiologist appointment in North Carolina and the initial visit with the early intervention people. The cardiologist said that she was doing excellent for her condition. It was our first time seeing this doctor so I don’t think anybody really knew what to expect. He was a little too non-conversational for us at the beginning but after he started to realize that Isabel was doing well he started to loosen up. The early intervention visit when well too. The ladies we worked with in Colorado set the bar very high so it was important for us to be comfortable that she will be getting as good of, if not better, care than before. They were very nice and had some fresh ideas to help Isabel with her eating.

Isabel has been adjusting to the lower altitude very well. She is keeping her saturation levels high enough to not need O2 during the day. We still need it at night while she is sleeping but it is very nice to not have an oxygen tube laying around everywhere.

We are getting settled in as well. Addison and Isabel are sharing a room now. Addison loves having her sister in the same room as her at night. I am hoping we will have their room pretty much unpacked and setup by the end of the weekend. There are still a lot of boxes to unpack but we will get to those as they come.

I was not planing on making this a summary of our week each time. It worked well this week with how busy we were and the fact that it has been almost exactly a month since we left Crested Butte. Sometimes it feels like just yesterday we were having fun day Friday pizza with our friends and then other times it feels like ages ago. It sucks that we had to leave so many of our friends behind but seeing Isabel already being off oxygen makes it all worthwhile.

4 thoughts on “It’s Been a Busy Week”