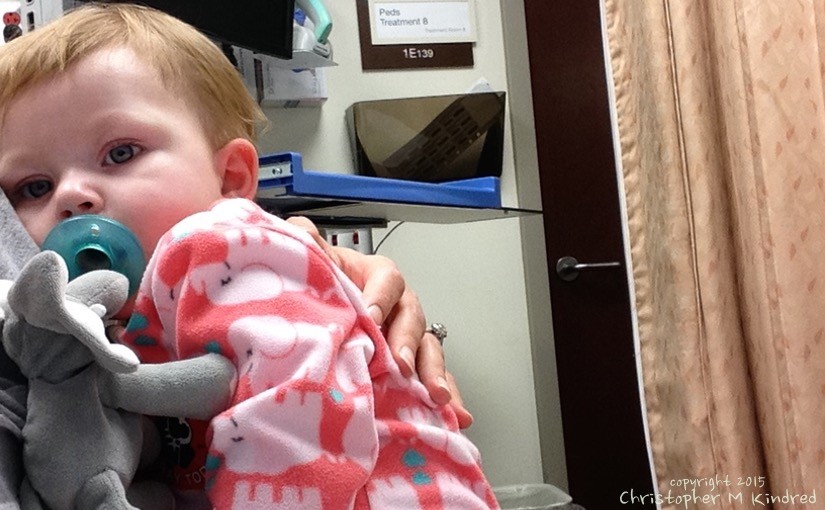 Isabel had her first trip to a North Carolina Emergency Room. She woke up around 3 in the morning screaming, which is very unlike her. She had a very fast respiratory rate and was running a fever. After about 2 hours she still wasn’t calmed down. We tested her o2 stats and they were low as well. We have always been told that a fever, high respiratory rate, and low o2 stats mean a trip to the ER.

ER Trips are always interesting for us. This time Jen described the doctor as the “kid” who looked at Isabel. It is kind of funny when we describe Isabel’s condition to an ER doctor. You can see their eyes go blank and they start trying to remember back to med school. This time the doctor started off on our bad side saying that she probably just got upset and it wasn’t anything. I normally trust doctors but we know Isabel and this was not a baby just getting upset. There was something wrong. They took a chest x-ray and tested her for FLU and RSV which both came back negative. They released her saying that her diagnoses was an “UPPER RESPIRATORY INFECTION”.

The next day we took her in to see our pediatrician. After giving Isabel the normal once over they asked if the ER doctor looked in her ears. Jen told them yes and the pediatrician laughed at the incompetence of the ER doctor we saw. Isabel has a double ear infection! They gave her some antibiotics and she should be getting better soon. I am just amazed that the ER doctor didn’t see it. Is it possible that the infection was so minor that it was easy to miss in the ER but when we got to the pediatrician it was that obvious? I am not a doctor. I don’t know, but it really makes me wonder about the service we will get at the ER next time.

One thought on “Isabel’s First ER Trip in North Carolina”